The Harvard Medical Student Review published an article in their January 2015 issue, “Dr. Maiden Name Will Now See You Now” which highlights the decision female doctors make once married – to adopt their husband’s name or to keep their maiden name. The article includes the results of a survey taken by women in the second-year class at Harvard Medical School as well as commentary from two nationally renowned doctors, Dr. Elizabeth Nabel and Dr. Ardis Hoven. 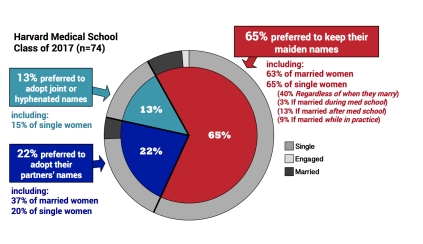 Source: Seventy-four women in the HMS Class of 2017 responded to surveys. The majority of the women wanted to keep their maiden names after marriage.

My friends – students and professionals in the health field, discussed this article at length, including the pros and cons of each decision. In the article, Dr. Elizabeth Nabel, the President of Brigham and Women’s Health Care, discussed her reasons for taking her husband’s name despite an already established professional career. Some of these included: the difficulty in pronouncing her maiden name and the desire to embrace her husband’s background and culture. In contrast, Dr. Ardis Hoven, the previous president of the American Medical Association, explained that keeping her maiden name was a choice she made based on her proud heritage, her established professional career, and more.

I’ve thought about this long and hard in the past and my conclusion has remained to hyphenate it: Dr. Maiden Name – X. One major reason is the cultural roots for me. The prefix in my last name has a big significance in my family; it means a lot to me as a Yoruba girl hailing from Osun state in southwest Nigeria and I wouldn’t want to lose it. If I married another individual with the same prefix, I most likely wouldn’t hyphen it. At the same time, I personally choose not to keep just my maiden name because I view marriage is a union, a unity of two different families, two different backgrounds, traditions, and more. I would like my last name to reflect that. To me hyphenating doesn’t mean letting go of my identity. It’s the happy medium.

I went searching through the internet for why the president and CEO of the Robert Wood Johnson Foundation, Risa Lavizzo-Mourey, MD, MBA, chose to hyphenate hers. As mentioned in a previous post, she is someone that I truly admire. I found two articles where she addresses this:

Lavizzo-Mourey knows her double-barreled name is a mouthful — and was a lot for her son and daughter, now adults, to learn to spell in kindergarten.

“Seventeen characters, almost the entire alphabet,” she sighs. But it was important for her children to carry her family name as well as the name of her husband. She says she and Robert wanted to stress the strengths and histories of both sides of the family.

When [Risa and Robert Mourey] married in 1975, they changed their names to Lavizzo-Mourey, a statement that their union was a true partnership. “We were both committed to having a dual career relationship and family,” she says.

I also went searching for a related post on this issue on Reflections of a Grady Doctor, a blog authored by Dr. Kimberly D. Manning, whom I also admire. I found such a post. Here is an excerpt:

When I first returned to Grady after my wedding and honeymoon back in 2004, quite a few people were surprised when I announced that I had a new last name. ‘Dr. Manning,’ I said without flinching. Not hyphenated. Not optional. This was my new name. And let me be clear: I think taking your husband’s name is a highly personal choice. I do not knock those who don’t one single bit. Especially because the vast majority of these individuals are grown women who should be able to do whatever the heck they want to do with their last names.

But me? I chose to become Kimberly Manning…So I’ll never forget it. I walked into Grady that Monday and one of the first people I saw was one of my favorite senior faculty members, Dr. Michael L. He scowled at me and said, “What’s this I hear about you changing your name? You’ve been here for three years! My brain is too old for new names.”

“You’ll adjust.”…And you know what? Despite his attempts otherwise, eventually he did. He adjusted. As did everyone else around me.

For whatever reason, it was important to me for those around me to respect my decision to take a new name enough to use it. Just as it’s equally important to respect those who choose to keep their maiden names and NOT assign them the name of “Mrs. So-and-So.” I was firm on that. So that meant that I quickly corrected accidental hyphenations and even those who persistently got it wrong. Never did I give in and simply say, “No big deal, Draper is fine.” And for that reason and that reason alone, I feel sure that everyone began to see me as Kimberly Manning.

So my conclusion is that it all comes down to personal preference. I’m all about hyphenating, other prefers to keep their maiden name, and a few others change it. In my opinion there is nothing wrong with either choice and choosing one or the other does not make you “less than” or mean that you’ve tossed your identity to the side or consider your career greater than your family. No, it doesn’t. But these are just my thoughts. What are yours?

Hi I'm Aderinola Adejare-Smith, but friends call me Derin. I've been blogging my journey to and through medical school (Ohio State Med Class of 2020 #GoBucks), and now as a resident physician, through my Anesthesiology training. Here you'll find tidbits about my life as a wife, christian, resident physician and more. Come join my fun ;-)

"When you learn, teach. When you get, give." - Maya Angelou